Slicing as the name suggests, is cutting in between to extract a portion.

Slicing in python applies to objects such as list, tuple or string to get a range of elements based on their index or position.

Thus, slicing is used to extract elements between two indexes from an object.

Return value after slicing is the same object on which slicing is performed.
That is, slicing a list will return a list, slicing a tuple will be a tuple and so on.
Slicing syntax
In order to slice an object, following syntax is used.

Thus, slicing a list with notation list_name[1:4:1] will return a sub-list with elements from index 1 till 3(4-1).
Slicing example
Consider a list of numbers given below.

If you want to select elements between positions(or indexes) 1 and 5, then slicing syntax will be

Above syntax may be shortened to

since step is 1 by default.

Look at the type of object returned by slicing, it is a list.

Since 0 is default value for start, slice syntax can be shortened to

Copying a list with slice
As seen above, if the start and stop values are omitted, these default to 0 and length of the list respectively. This means that if both of these are omitted, then entire list will be selected.
If you assign the sliced list to a variable, then it will have the same contents as the original list. Further, any changes made to this list will not be reflected in the original list.
Thus, we can create a copy or clone a python list with slice syntax. Example,

Look, modifying sliced list makes the original list unaffected.
And if you compare cloned and original lists with == operator as sub == numbers, you will get False. Thus, these are two different list objects.

Negative Indexing
As stated earlier, elements in python objects such as list, array, set etc., are indexed with the first element having index 0 and so on.
This index is counted from left to right. Python also supports indexing from right to left, in which case, indexes begin from -1.
So, the index of first element from the right is -1, second is -2 and so on, as shown below.

Negative Index slicing
Slicing syntax also supports negative values in all the three parts: start, stop and step. As with normal slicing, elements with positions(or indexes) between start and (stop – 1) are included in the result.
1. Slicing with start and stop negative
When both indexes are negative, slicing starts at the start index and terminates at one element before end index both counted from right as seen from the below illustration. 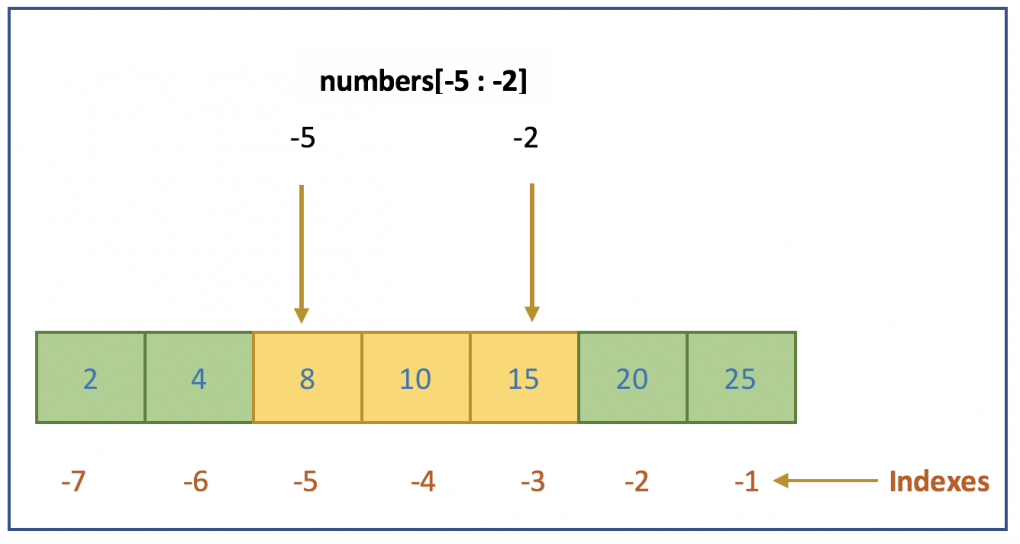 This will be clear from the below illustration. 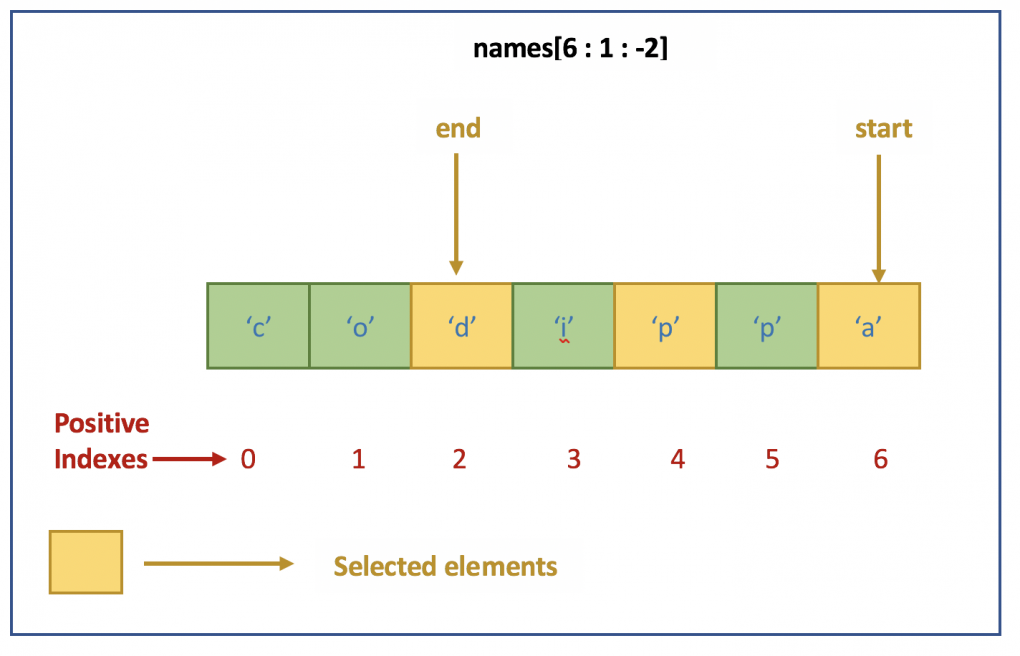 which shows that sliced list is reversed.
Though there are many other ways to reverse a list in python but this one is the most concise.

Updating multiple list elements
Suppose you want to update more than one list elements that are adjacent to each other such as elements at index 1, 2 and 3.
Normally, you would write something like

Slice at the left hand side is assigned another list. Sliced syntax selects elements at index 1, 2 and 3 which are overwritten by the elements given in the list.

Above example can be understood by the following image. 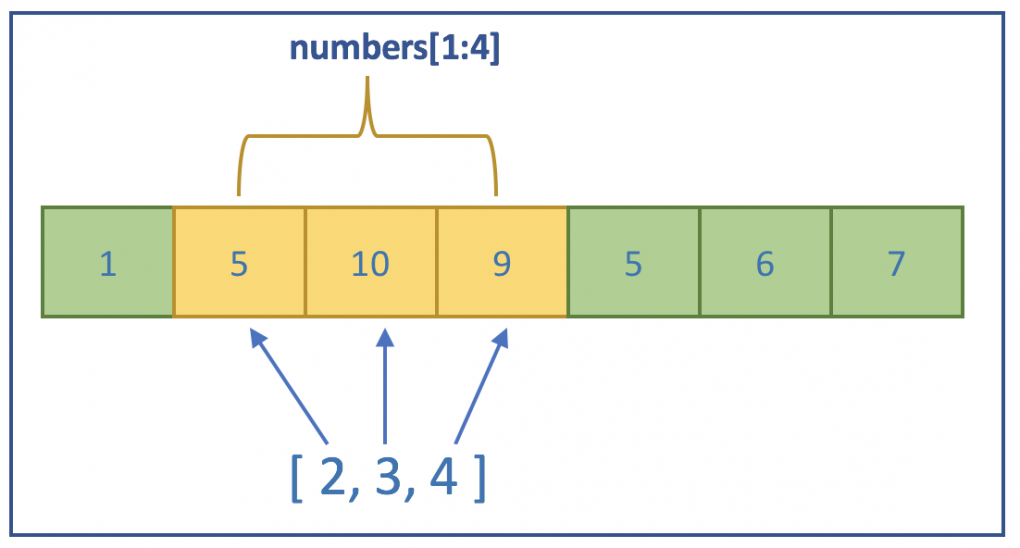 Sliced list has elements from index 1 to 4(3 elements) while assigned elements are only 2. Updated list has 1 element removed and all the remaining elements are shifted to left.
String slicing
Slicing syntax is also applicable to python strings. That is, you can select a range of characters from a string as shown below.

Syntax of slice() function is

slice() function example
slice() function does not return sliced object but instead returns an object of slice class. This value is then supplied to the object to be sliced enclosed between square brackets.
Example,

slice() function syntax is equivalent to

Benefit of using slice() function is that once it is created, you can reuse it multiple times and across multiple objects without repeating the indexes.

If only one argument is given to slice(), then it is considered as the stop value while start and step are set to None.
In this case, elements from index 0 till stop – 1 are selected. Example,

In this example, slice(4) is equivalent to numbers[:4].
That is all on object slicing in python to select a range of adjacent elements.
Click the clap icon if the article was useful.