What is ‘this’
'this' means the object whose code is being executed right now.
'this' is a keyword in java.
A keyword is a reserved word that has a different meaning which is known to the compiler.
This article will explain what does 'this' mean, its purpose and usage with explanation and examples.

Following illustration will help in understanding what is meant by current executing object. 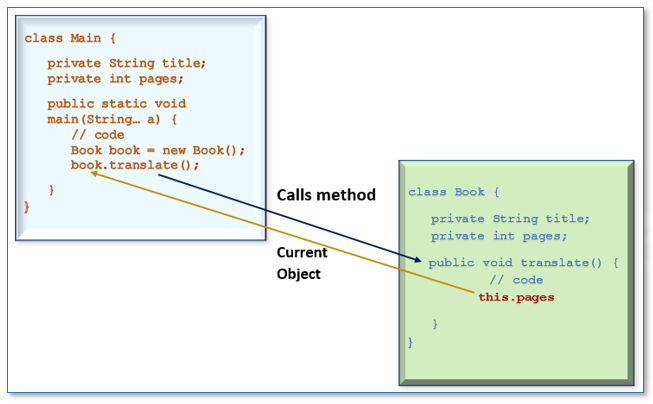 Suppose an object of a class is created. This object calls one of its method.
Now, inside the invoked(or currently executing) method, 'this' will refer to the current object(which was used to invoke the method).

In simpler words, 'this' will refer to the object which called this method.
Since 'this' refers to the current object, you can invoke its methods and access its properties using 'this' as shown in the above image.

Current object and ‘this’
To demonstrate that 'this' is in fact the object in execution currently, have a look at below program.

Above program creates an object of a class and invokes a method of the same class.
Created object is printed before invoking the method and inside the method, this is printed.

Check out the output

Look, both objects are same.
static and ‘this’
'this' always refers to an object while static keyword refers to a class.
In static context, there is no object. Hence, you can not use 'this' inside a static method or a static block.
Trying to do so, will result in a compiler error “Cannot use this in static context”.
Thus, there is no 'this' in main method.

In the above example, a class contains 3 constructors.
Each of the two constructors invoke the third constructor using 'this'.
2. Refer class variables
'this' refers to an object of a class, hence it can be used to access variables of its class.
Variables or fields are accessed using 'this' followed by the dot(.) operator and the name of field.
Example,

Above example creates an object of a class, initializes it field and invokes its method.
Inside the method, the field of class is accessed using ‘this’.
Though 'this' is redundant here since the compiler implicitly places 'this' before a class field is accessed.
3. Refer class methods
As class fields are accessed, methods of a class can also be accessed using 'this'. This is generally used to invoke one method from another.
Class methods methods are invoked by using dot(.) followed by the method name after 'this', followed by any arguments accepted by the method.
Example,

Above example invokes a class method from another class method using 'this'.
Although the method can be invoked without using 'this' as well, since the compiler implicitly inserts 'this'.
4. Supplying current object
There are class methods that accept an object of a class as argument.
If these methods are invoked from a class, then 'this' can be supplied as argument.
Below example will clarify the concept.

A class Publisher contains a method that requires an object of class Book as argument.

This example creates an object of the class using a parameterized constructor.
The constructor initializes fields of its class using the values provides as arguments.
Note that the names of constructor arguments and class fields are the same.

Now when the program is executed and the values of fields of the class are printed, below is the output.

What happened here?
Values were provided but still they are not initialized.
This is because when the names of arguments and class fields are same, the compiler thinks that you are assigning the class fields with their own values.
Hence, it assigns the current value of fields back to them.
Thus, when they are printed, default values as per the data type of the fields are printed.

To resolve this problem, 'this' is used. Modified constructor is shown below.

Now execute the program again and below output is produced.

In this case, the compiler is able to distinguish between class fields and the constructor arguments and thus assigns them properly.

Hope the article was useful and helped in explaining the concept of 'this' in java. 0