static keyword
static is a reserved word(or keyword) in java. It can be applied before a

Writing static keyword before any of the above makes it static.

static meaning in java
static in java means belonging to the class and not to the instance. If a field, method or a block is made static, then it is shared by all the instances(or objects) of the class.
This also means that only one copy of the static member exists for all instances.

Remember that static members of a class exist independently before even any instance of the class is created.
Suppose there is a class which contains both static and non-static fields and methods.

If a couple of instances of the above class are created, then they will be represented in memory as 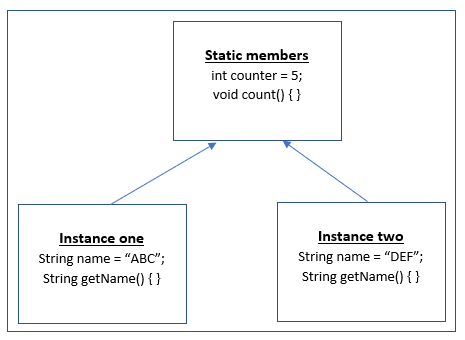 As stated earlier, static members(variables and methods) are directly linked to the class and not to any instance, thus they can be accessed directly using the class name.

In other words, no instance of a class is required to access its static members.
Thus, in above example, static members can be accessed as

where StaticExample is the name of class.
Use of static keyword in java
static variables and methods are most commonly used when they should not have any relation to an instance of a class.

Let’s say a variable should hold some information that is common for all objects or a method that performs its task with that task having no association with the class objects, then it is better to make them static.

Below scenarios will be ideal examples for the use of static variable and method in java.

Where as, suppose a variable should hold the name of a person.
Now each person is represented by a separate instance(or object) and hence would have a different name.
Thus, it should not be made a static field but a non-static or instance variable.
static example in java

Below is an example of using static and non-static variables and methods in java.
It will be using the StaticExample class defined above.

Also, static fields should be accessed using class name only and not using objects.
Though you can access it using instance variable also but it is not recommended and the compiler will flag a warning such as

The static field StaticExample.counter should be accessed in a static way

This is because static members do not belong to any particular object or instance.
Non permissible static usage
Following can not be marked static in java

Using static before the above will be a compiler error.
Click the clap if the article was helpful for you.