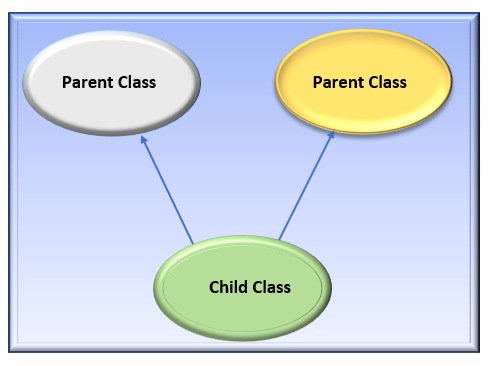 where a class can have more than one parent classes.

Before moving on with this post, it is recommended to understand the concept of inheritance in python, if you are not already familiar with it.

Diamond problem
The reason why many programming languages do not support multiple inheritance is name resolution conflict. Suppose a class C extends classes A and B both containing a field or method with same name. When an object of child class is created and common method is called, there rises an ambiguity as to which parent class method should be called. This situation is also referred to as Diamond problem. A code example will be beneficial here.

Child class has two parent classes, each of which contains a method with same name. Child object has access to both these methods. Now when child object is created and it attempts to call this method, which method should be called.

Note that method of class Father is called since it was extended first and it contains called method.

If all the parent classes and the child class itself do not have a method matching the name of method which is called, then an error will be raised

There is one more thing to note here. If the parent classes contain a field with same name, then the value which is set last is used as happened in the above example. Both parent classes contain name field which are initialized from constructor of Child class. Last initialized value is printed. Try reversing the order of initialization of fields in Child constructor and notice the difference.
Hope this post clarified the concept of multiple inheritance in python.

How to convert string to int in python