What is exception
Exception is an unexpected and undesirable condition that occurs during program execution.
Example, you are trying to fetch data from a database table.
Connection to the database is successfully established but before query execution, the database service suddenly shuts down.
Result is that the program unexpectedly breaks.

What is exception handling
Exception handling means the measures taken in a program to face unexpected failure conditions so that the program does not break due to any such events.

In a program that has proper exception handling in place, following are the benefits over an application that does not have exceptions handled

If a program does not have exception handling and some exception occurs, then default exception handler of JVM comes into picture and it prints the complete stack trace of the exception starting from the point where exception originated till main method as shown above.

Exception handling in java
Java provides try, catch keywords to handle exceptions. Any code that the developer thinks as risky or that may raise an exception is placed inside try block.

try block is a set of statements enclosed between curly braces and preceded with try keyword. try block is followed by a catch block which contains the type of exception that this block will handle.

During the execution of try block, if an exception occurs, then the control is transferred directly to the catch block which handles the type of exception raised and no further statements in the try block are executed.
Example,

Above try-catch block contains some statements that the developer considers to be risky.
Note that the catch keyword is followed by a java.io.IOException.
Here it is declaring that any exception which is of type java.io.IOException or its sub-type will be caught and handled by me.

When there are multiple catch blocks handling different type of exceptions, then the order of these blocks is important.

while this is perfectly legal

Exception handling program in java
Below is an example program which demonstrates how to use try-catch block to handle an exception in java.
The program tries to read a file. Now when reading a file, it might happen that the file is not located at the specified location or it is corrupt.
First condition will raise a java.io.FileNotFoundException and second will raise a java.io.IOException. Both are handled in the program.

And if the file to be read is not present at the given location(exception condition), then the output will be

A try block should be followed either by a catch block or finally block or both otherwise there will be a compiler error.

finally block is guaranteed to execute. A finally block will execute even if an exception arises inside a catch block.

Thus, use of finally block is for cleanup related tasks such as closing a database connection, files or network connections.
Above program modified to use finally block will be as below.

Output now will be

In the case of nested try blocks, each block should have its own associated catch or finally blocks or both. Example,

Classes which extend java.lang.Error represent abnormal conditions which are not raised by the program such as java.lang.OutOfMemoryError which occurs when the application takes more than available memory. 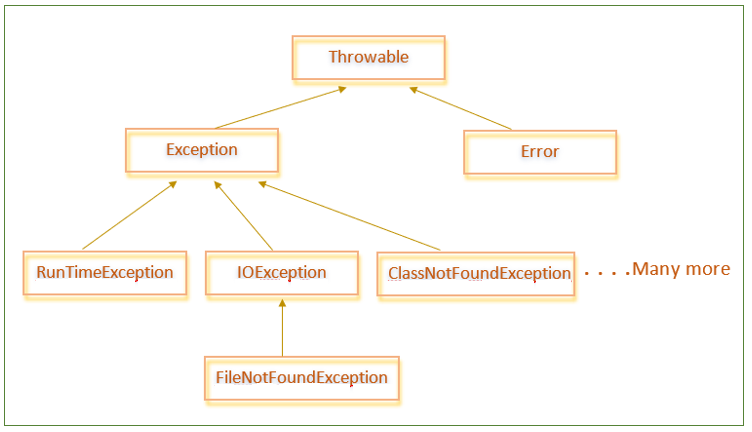 Child classes of java.lang.Exception are further sub-divided into two groups

1. java.lang.RuntimeException
Super class of all exceptions that occur due to programmatic errors such as

Sub-classes of java.lang.RuntimeException are also called unchecked exceptions since they do not need to be caught or declared in method declarations if not handled by a try-catch block.

2. Other child classes
Classes which directly or indirectly extend java.lang.Exception are called checked exceptions.
These exceptions need to handled or declared to be thrown if not handled.
Example,
Suppose a method reads a file using java.lang.FileReader as in our earlier example.
Signature of the constructor of this class is public FileReader(String fileName) throws FileNotFoundException.
It declares that it may throw a java.io.FileNotFoundException.

Thus, if you use this constructor to create its object, you need to handle this exception by placing it in a try-catch block or your code also needs to add a throws clause.
This is because java.io.FileNotFoundException indirectly extends java.lang.Exception and hence it is a checked exception.
Creating custom exceptions
Besides using built in exceptions, it is also possible to create our own exceptions. In fact, most applications create custom exceptions which is used throughout the application.
This is done so that there is uniformity across the application.

To create your own exception, create a class and make it a child class of java.lang.Exception so that it becomes a checked exception which needs to be handled or declared in the application code.
Hope you liked this article and learnt from it.
Hit the clap below to show your appreciation. Write comments for any additions or mistakes.